Our boy, and employee, Craig “Jackson” Roth will be holding it down for Boston this weekend in the 10th installment of Monster Track. Monster Track is the messenger race of messenger races and can only be raced on a fixed gear with no brakes. This has led to problems with the man in years past and obviously to more than a few wrecks, but hopefully this years events will go off without issues or injury! Craig will be heading down on his new whip, which he just got built up. It is an Affinity frameset that he won last year at Monster Track 9 for being the fastest out of town racer, and is also sporting a fancy velocity wheelset he won at the Chicago NACCC last year for coming in 3rd overall. Incase you don’t know those are both way more than respectable accomplishments and we at Cambridge Bicycle are thankful for the representation he is giving not only our shop but our city as well at these events! So if you are in NYC this weekend make sure to hit up Monster Track X and later this year the NACCC are coming to Boston! 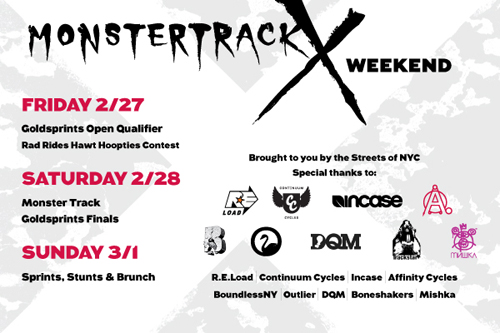