Cambridge Bikes recently got a big shipment of Mavic shoes, and I was lucky enough to get ahold of a pair to try out. I chose the Avenir model because they will look hot with the new CB race kits, due in any day now. Here’s my experience so far: 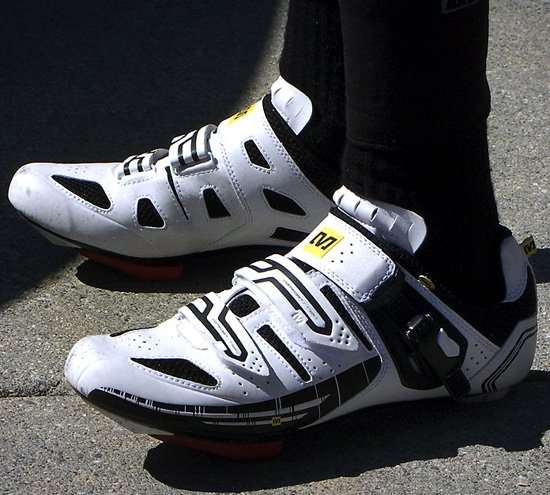 Last year I raced with the Adidas Adistar Road Pro, which were made by the same company (Salomon) that owns Mavic. Mavic now makes the Road Pro model, with a price in the $250 range, but the Avenir that I’m wearing is a lower end model, costing only $130. What’s the difference? Well, 35 grams and $120. To be fair, the Road Pro’s have a carbon sole and the Avenirs have a fiberglass sole. I’ve done 170 miles in the Avenirs so far and haven’t noticed any lack of stiffness in the sole, so for me it’s all about the comfort.

Now shoes fit differently for everyone, but the first thing I noticed when I put on the Avenirs was how comfortable they felt. I try not to be a shoe snob (or any kind of snob for that matter), but until now Sidi’s where the only cycling shoes that ever felt comfortable to me right out of the box. I felt just as at home in the Avenirs. I think the main reason is that the body of the Avenir is just plyable enough to form to my very irregular feet and still feel solid. The Adistar never quite felt that way to me, even after a full race season. Also, the Adistar didn’t have a true tongue, instead simply cinching around your foot. The Avenir has a slightly padded tongue that goes a long way towards comfort.

One thing Mavic has changed from the older Adidas models is the ratchet mechanism. While the Adidas used a center buttom push-to-release, the Mavics have a little lever on the side that you lift-to-release. Since I spend most of my time in my Sidi Dominators, neither of these two designs felt intuitive to me, but after two rides I’m already used to the Mavics. I really like the feeling of security the ratchet strap gives you. The Avenir utilitzes a ratchet strap top closure, and two lower velcro straps. 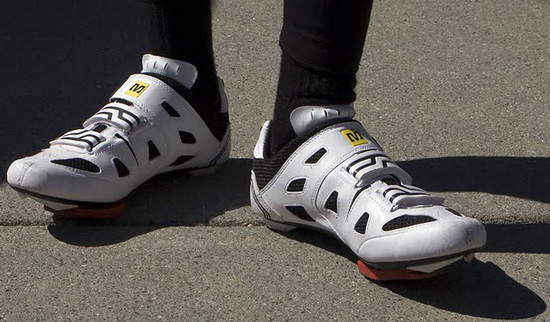 Mavic does make higher end shoes, all the way up to the $300 Zxellium you can see Tim Johnson wearing them in the recent Redlands Classic and the $450 Zxellium Ultimate that weigh only 245 grams, but for the money, I think the Avenir is a smart purchase. I hope to be wearing them on a podium somewhere soon!

Also, due to the arrival of the Mavic shoes, the Adidas models are now 20% off at Cambridge Bike. That means the Adistar Road Pro will cost you about $160. So, if you’re not a shoe snob either and don’t mind wearing last years model, there are some good deals to be had on these shoes.