Natalie “Customer of the Month”!!!

I decided it’s time to show some love to the customers that have been behind us in everything that we do here at Cambridge Bicycle, and when I was thinking about this, one of our newer customers popped into mind: Natalie. The first time I met Natalie she stopped in to pick up a few parts for a bike she was building. She then stopped back a few days later–with the bike–to get some parts installed. We chatted and I invited her to the Freddy Vs. Jason Race. Well, she showed up to the race on her freshly built bike to take 3rd place for the ladies. What was really awesome, though, was that when she came up to the prize table still full of items like Rapha cycling hats, issues of Rouleur, and other fancy shwag, she chose the Cambridge Bicycle cycling cap instead.

From Freddy VS Jason Alley Cat on Elm St
Later in the night, Natalie raced Bold Sprints and took first place, leading her back to the prize table. This time there was a Freight Messenger Bag still on the table and she almost went for another CB hat (because she wanted to get one for her friend.) I swiftly talked her out of it pointing at the freight bag and gave her another hat for liking us so much. It’s customers like this that make working at Cambridge Bicycle so great! 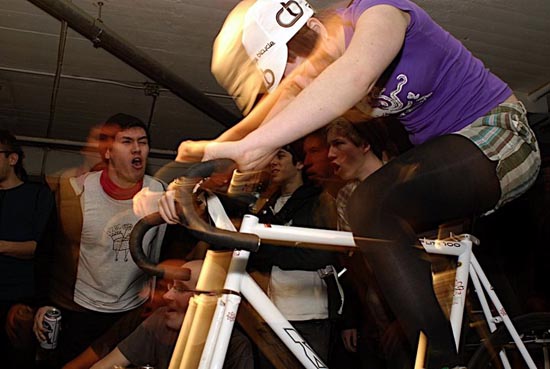