The Cambridge Bicycle Summer Omnium Series at the New England Velodrome has seen some good racing so far this summer. Last Tuesday and Wednesday saw the second in a series of three events, and Pursuit Races were the feature omnium event. Racers competed for Omnium points in both the 3000 meter Individual Pursuit and the Australian Pursuit.

Gary Bavolar was only .14 seconds off the winning time.

With Omnium points up for grabs, both nights saw some fierce competition. Tuesday night had both Juniors and Womens fields, and many new riders showed up as well. If you’ve ever considered giving track racing a try, the track has a very accommodating atmosphere for new riders. Check the website for information of rideshares up to the track.

Here are the photo galleries from the races on
Tuesday night and Wednesday night. 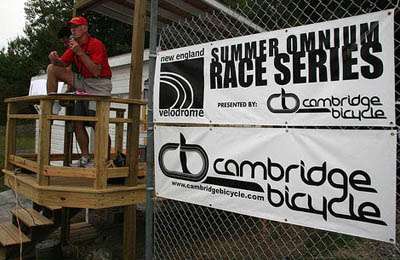 The Category B field warms up with a Scratch Race.

The final week of the Cambridge Bicycle Summer Omnium Series is coming up on July 21st and 22nd. Featured races for the final week will be the ever popular Miss and Out and Match Sprints. Mark your calenders now so you don’t miss out on you last chance to score Omnium points to win some great prizes!

Results and Standings can be found here.