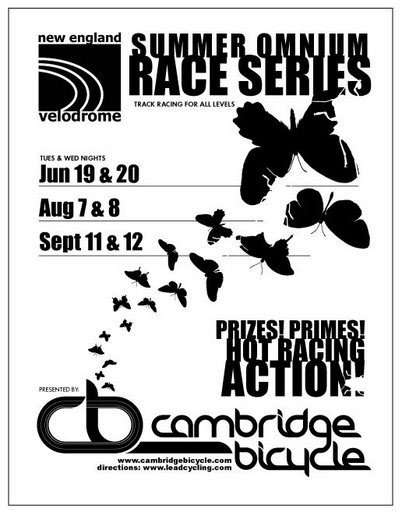 The Summer Omnium Series is about to begin at the New England Velodrome this coming Tues. and Wed. nights June 19 & 20. This three part series promises to be the fastest, most intense, and exciting bit of track racing to happen anywhere in New England. Note: The prize list hasn’t been solidified, but its going to be big…REAL BIG!

Every week so far this year the track has broken previous attendance records.

Teams spotted: Aside from a huge Cambridge Bicycle Track Team contingent…Cyfac/Velo Europa, NEBC, MIT Cycling, NERAC/International, ECV, Lake Sunapee, and I’m sure there are a few more that were missing…

The Cambridge Bicycle Track Team has put together a Google Group for Cambridge/Boston based riders who want to head up to NH. Sign up and let us know that you’re coming, and we will be leaving from Cambridge Bicycle on Tuesdays and Wednesdays between 3 and 4 (unless otherwise noted) to head into the northwoods.

This ride share is good for every week. Not just for the Omnium Series.